The Bog Bush-cricket is a relatively small, compact bush-cricket with short wings. The body is brown, usually with green markings. The hind femur has a black stripe. The species occurs in bogs, moorland, grassland and pastures, often in large numbers. It is distributed in most of the South-Eastern Norway and here and there in the Vestlandet region. 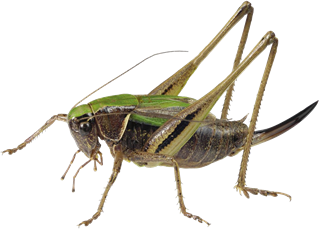